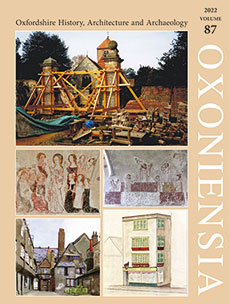 All volumes from 1936 - 2017 are free to read for anyone. The most recent volumes are only available to subscribers, for more details go to oahs.org.uk Volume 87 (2022) is now available. Subscribers can read all the articles once they have logged in.

If you have forgotten or do not have a login, please contact the Webmanager for assistance.

Oxoniensia is the annual journal of Oxfordshire Architectural and Historical Society (OAHS). It is one of the foremost archaeological, architectural, and local history journals in the country. It includes excavation reports, surveys of buildings and standing structures, and articles on the history and topography of Oxford and Oxfordshire. The year's volume is generally published towards the end of the year.

Oxoniensia is a refereed journal.

The Archaeology of Oxford in the 21st Century 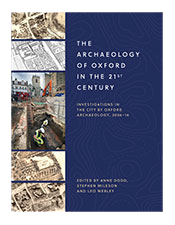 Read an extract of The Archaeology of Oxford: Current Knowledge and Future Prospects by David Radford

To read more and order a copy, please go to the OAHS website

Guided by its objective of promoting knowledge of the history of Oxfordshire and its buildings, and in order to increase involvement in such studies, the Society is offering an essay prize. The aim of the prize is to encourage articles from those who have not previously published in the field.

A prize of £250 is offered annually for the best essay on a subject related to the archaeology, architecture, or history of Oxfordshire. The winning essay will be considered for publication in Oxoniensia. 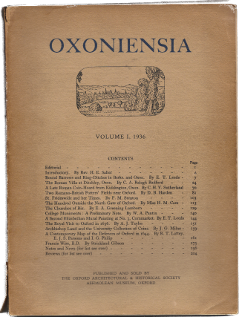 Oxoniensia first appeared in 1936. The early volumes contain a remarkable mix of history and archaeology, including some of the very earliest aerial photography. Publication was maintained through the second world war, though paper shortages meant that volumes were short and produced in very small runs. Most of the early material now made available on this site has until now only been available in a few libraries, mostly in Oxford.

Lest it [Oxoniensia] should in time degenerate into the same sort of annual report that the Proceedings eventually became, the committees responsible for its inauguration have decided that accounts of the Society’s meetings and excursions shall not be included in its pages. And, to prevent its falling by the wayside through lack of a direct appeal to the main body of its potential subscribers—those resident in Oxford and its neighbourhood—it has been decided that no articles shall be published except those dealing directly with local topics. If those who control its policy in future years abide by these two rules, there is no reason why Oxoniensia should not go from strength to strength, and attract supporters in ever-increasing numbers from the ranks of those to whom the history and antiquities of the Oxford district are a source of interest and delight.

Editorial statement in Volume I, published 1936